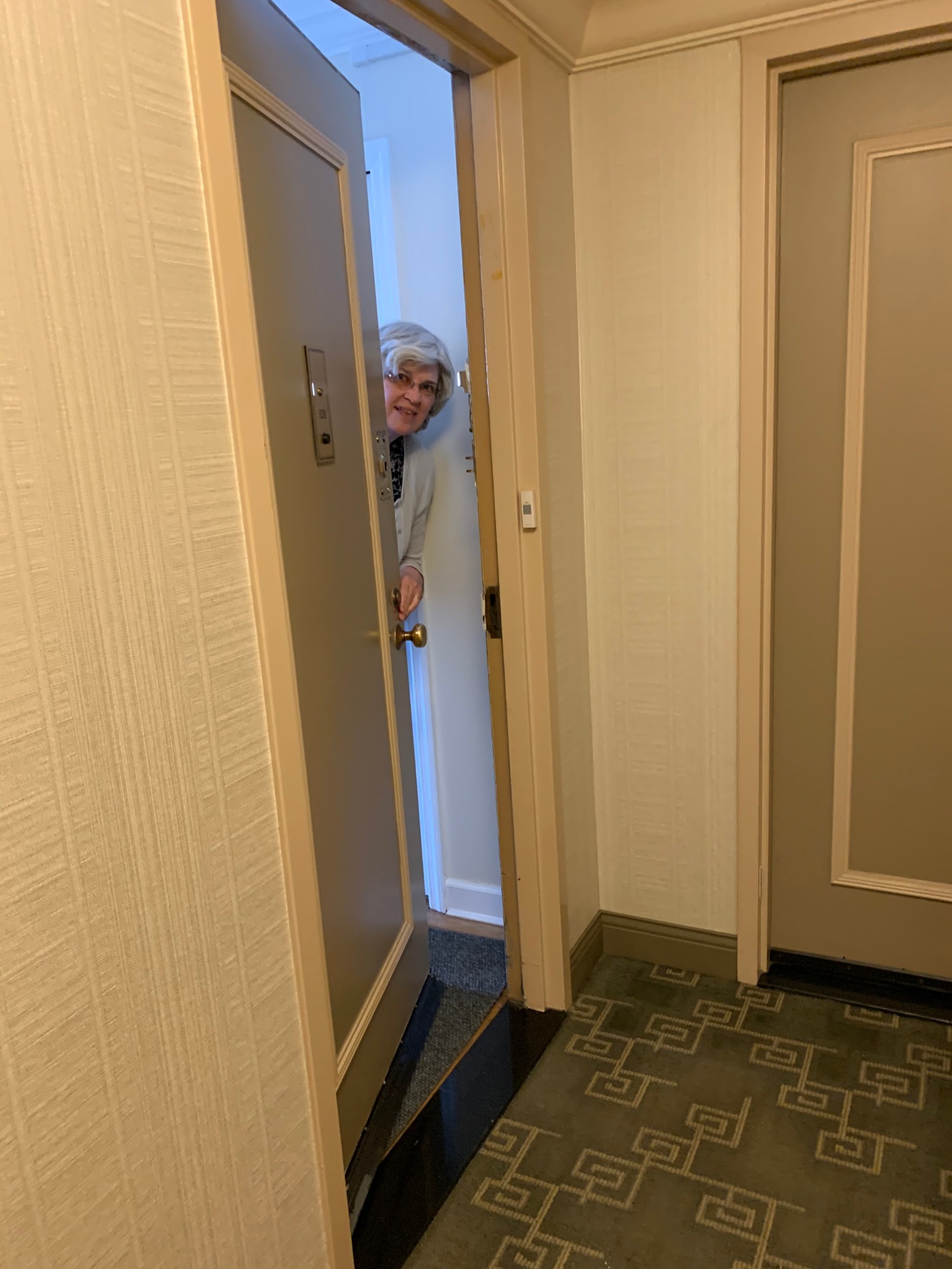 “Come!” our friends urged, “We have fish in the freezer and we can heat up the pool. The deck is lovely this time of year. You can sleep in the guest room or in the den, wherever you would feel more comfortable.” It sounded so enticing. We hadn’t been anywhere in three months except to the hospital, and the idea of venturing out made it seem that life could indeed return. Maybe my vision of being hunkered down in our apartment for the next 18 months wasn’t the only possible reality that lay ahead.

I’ve been going to the parks more often, Cadman Plaza Park, across the street, and, next to that, Walt Whitman Park. Yesterday, as I walked, I had one of those revelations that have become more frequent lately, perhaps because I am so often monitoring my reactions, trying to find my way to the next stepping stone that will take me across the Covid pool. “Oh,” I thought, “when I walked here last week, I was more fearful.” I had almost given up coming to the park because my walks were spoiled by my wariness—watching every approaching stranger and mentally strategizing our passing on the narrow path. “Those young girls sitting on the wall, can I get past them without walking on the grass?”

I was less vigilant on my walks now. I was becoming accustomed to life lived among masked strangers. For brief periods of time, I forgot all about the invisible foe, thinking of other things, making up stories about the family under the trees, taking photos of cars to compare to the new Legacy we had just ordered, sight unseen and undriven. Friends had loaned us the car we have been driving since the pandemic began, and, since there was little end in sight, we became once again car owners, a role we thought we had left behind.

I remembered how Jamie Stelter, traffic reporter on Channel One, responded to her colleague Pat Kiernan’s query, “So Jamie, you made your first trip to the supermarket. How did it go? Will you do it again?” Sitting in front of a screen of the city in her at-home studio, Jamie replied that all had gone well and then, pausing, looked briefly at the ceiling and, with a little nervous giggle, admitted, “Yes. I think I probably will.”

Even careful Jamie, with her two small children is opening the door a crack. Later in the day, on another channel, I heard the announcer say that all 50 states have reopenings of some ilk this weekend. The world was changing again.

Upon reflection, I realized that I’m not as nervous in the elevator, though I’m still masked and standing as still as I can so as not to encounter any lingering droplets. When I crossed the street to the park, there was so much traffic I had to use the crosswalk and wait for the walk light. Up until now, I’ve been able to look both ways and cross anywhere. And when our two young grandchildren sent flowers, I didn’t wait until most people had gone to bed to go down to the lobby to get them. It struck me that we no longer anxiously waited for the Governor’s press conference in the middle of each day, hoping to better understand life’s daily permutations. For the past three days, although I had turned the television on, I had listened to him for about five minutes before my morning nap found me. Today, we were caught up with other things and had even forgotten to watch or to tape his prattling for later viewing.

I even allow myself the occasional carelessness, taking the recycling down the hall without a mask. Since the pandemic began, I have seen only one other resident on this floor of 12 apartments, so maybe it isn’t much of a hazard. Still, if I stop being circumspect about little things, I may easily forget that life isn’t the way it was and move on to greater transgressions.

When we zoomed with a friend this morning, he described how his brother, sister-in-law, and nieces and nephew from Massachusetts called to make arrangements to go bike riding with him. They would be outside; they would wear masks; everyone would keep their distance. After he told them to come, he realized that they would probably want to use his bathroom before they set out on their bikes. He had a moment of panic, and then arranged everything to minimize the risk. He put out paper hand towels, moved things so he could open the door and let them go straight into the bathroom without touching anything. At the last minute, he remembered the light switch and went in and turned it on before they arrived.

In my telehealth meeting with my physical therapist, I asked if she was having many in-person visits. She had been going to her office only on Thursdays, but this week she had added in Tuesdays as well. “Not really,” she replied, “I have a couple of patients who need to be seen more than once a week and a fellow who moved back to Brooklyn from his girlfriend’s apartment who wants to come in person. I have one new patient next week. It may build up. I think right now lots of people are talking about it, but they aren’t ready to be out yet.”

It’s as though we are opening the door to see what is outside, but, while I see some crowds on television, the people I know aren’t stepping through that door whole heartedly. At the most, they are cautiously sticking their noses through the opening to get a whiff of the new climate. It is perhaps different for folks not of my demographic; maybe this being out process is less fraught with concern for them. Still, our daughters and their families remain sequestered.

When Rosemary began talking to Jennifer about us visiting for Memorial Weekend, I hesitated, and then, like Jamie Stelter, thought, “Sure, I can brave the world again.” The spirited conversation around the dinner table, the inevitable laughing, and the swimming pool called to me. Like us, Jennifer and Ann have been living cautiously. They are our age and Jennifer has an underlying health condition; Ann goes to the grocery store and changes her clothes as soon as she returns home.  We would bring our own risks, for Rosemary is still going for chemo each week, to an incredibly well-guarded and safe building, but still…they would be taking a chance by letting us into their home.

I hardly knew how to think about spending the weekend with our friends. We would be bringing them into our pod, making them safe people in our world. But how would this work? We hadn’t been with any other people since the beginning of March. I asked Rosemary, “Do you think we will keep six feet between us?” Probably not likely, given the size of their house. And what sense would that make, anyway, if we were going to be swimming in their pool? This was all seeming very strange. And a little scary.

That night, I dreamed that I befriended a middle-aged Latino on 14th street who had just learned that he had heart disease and would probably die soon. I sat very close to him in the car to comfort him, before it dawned on me that I was supposed to be distancing.