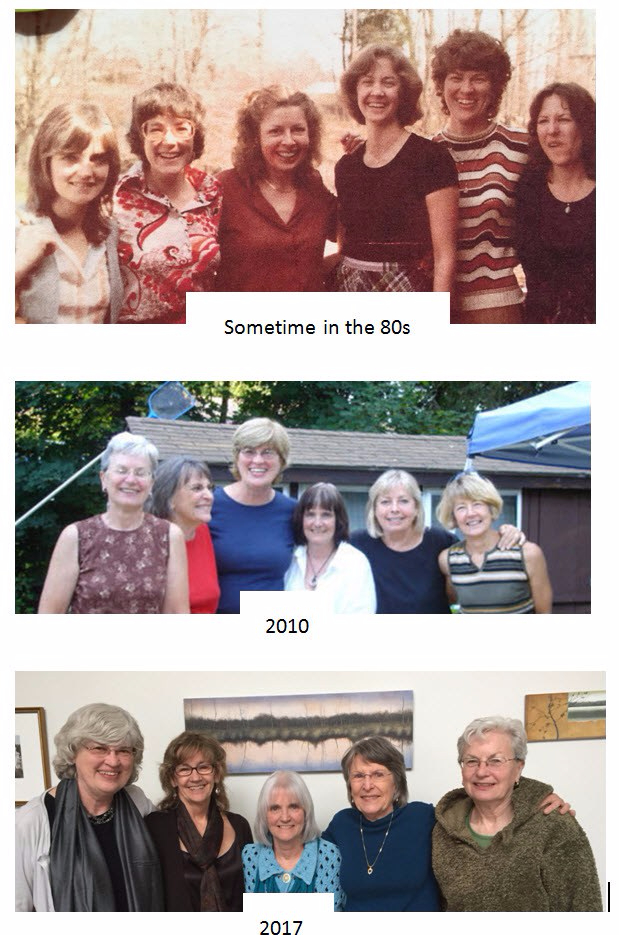 I recognize them all immediately of course, but it has been some time since we have been together – Evie’s funeral eleven years ago, a couple of reunions over the years. I have seen Barbara only once since she left for the West Coast, after our consciousness raising group ended, sometime in the eighties.

Rosemary and I sit with the group in two rows at the back of the congregation. Slides of Suzanne flash on the wall behind the altar, but there is too much happening for me to concentrate on them. Josh, the minister, walks to the pulpit.

I hugged John, Suzanne’s husband, when I came in. He was all teared up and couldn’t speak. I hugged him for a long time. I didn’t want to let him go. Their daughter Nicole tells me later that in 53 years of marriage, Suzanne and John spent only 30 days apart. They were both artists and had studios together, were professors together at the community college, led art history tours to foreign countries together.

People tell memories. Barbara speaks for our group. I don’t say anything, but I remember how Suzanne once said that if she were to paint a portrait of me she would paint my head with all my unfinished projects streaming out behind me like a comet’s tail.  I think of her painting hanging over Rosemary’s desk, a palimpsest painting, in which the original words or pictures have been erased, but still show through the later drawing–words from her grandfather’s whaling log over a map of Provincetown, a nude woman diving beneath it all.

It is all a little difficult. I talk to a few people I know. The other Barbara, the one who still lives in Connecticut, wants to meet Suzanne’s grandchildren and I go with her. I just can’t make sense of the time and say something nice to Maddie, the nine year old, but I call Suzanne her mother instead of her grandmother. I know that Suzanne’s daughter Nicole is a mother herself and not this nine year old girl, but it just gets all mixed up in my head. I spend a few more minutes with John before we leave. I hug him again. “I survived,” he says, or maybe I say that.

After the service, we sit around the dining room table in Kathi’s house, sharing memories of Suzanne, of Evie, and other members we have lost track of. We try to recreate what brought us together in 1974, where we had held meetings, what topics we discussed, how our lived had changed. Memories are hazy, but together we create a collective memory of our younger selves.

I had just turned 30 when we met in 1974, when I responded to Evie’s ad to form a group. I had recently left the commune, Coventry Day Farm; I was coping with a shattered dream. I was living with Ron and days-old baby Shannon, at the top of a hill surrounded by miles of woods and farmhouses.  I had a part time job doing census work, but it was solo work, driving around the back roads of eastern Connecticut conducting hour-long interviews with elderly people in a ten-year longitudinal study. I was lonely.

The vibrant young women who came to Evie’s apartment each week provided a way to re-integrate myself into the society that I had left when I quit my teaching job and moved to the commune. The group offered an opportunity to analyze my role as a new mother, as a worker, and as a disillusioned citizen. The others were struggling with similar issues. We became friends. They were a lifeline.

The dynamics of the group now are much the same, but our concerns are different–those of women in their sixties, seventies, eighties–health issues, grandchildren, limitations in what we can do, living arrangements as we age. We vow to meet again, more regularly. Suzanne was our glue – artist, prom queen, professor – the articulate extrovert. We would have to redouble our efforts to stay connected.

I look around the table and see the faces of these strong women. Like the palimpsest of Suzanne’s paintings, the faces of their younger selves appear, somewhat erased by their experiences, but still there, fading in and out beneath their present faces.