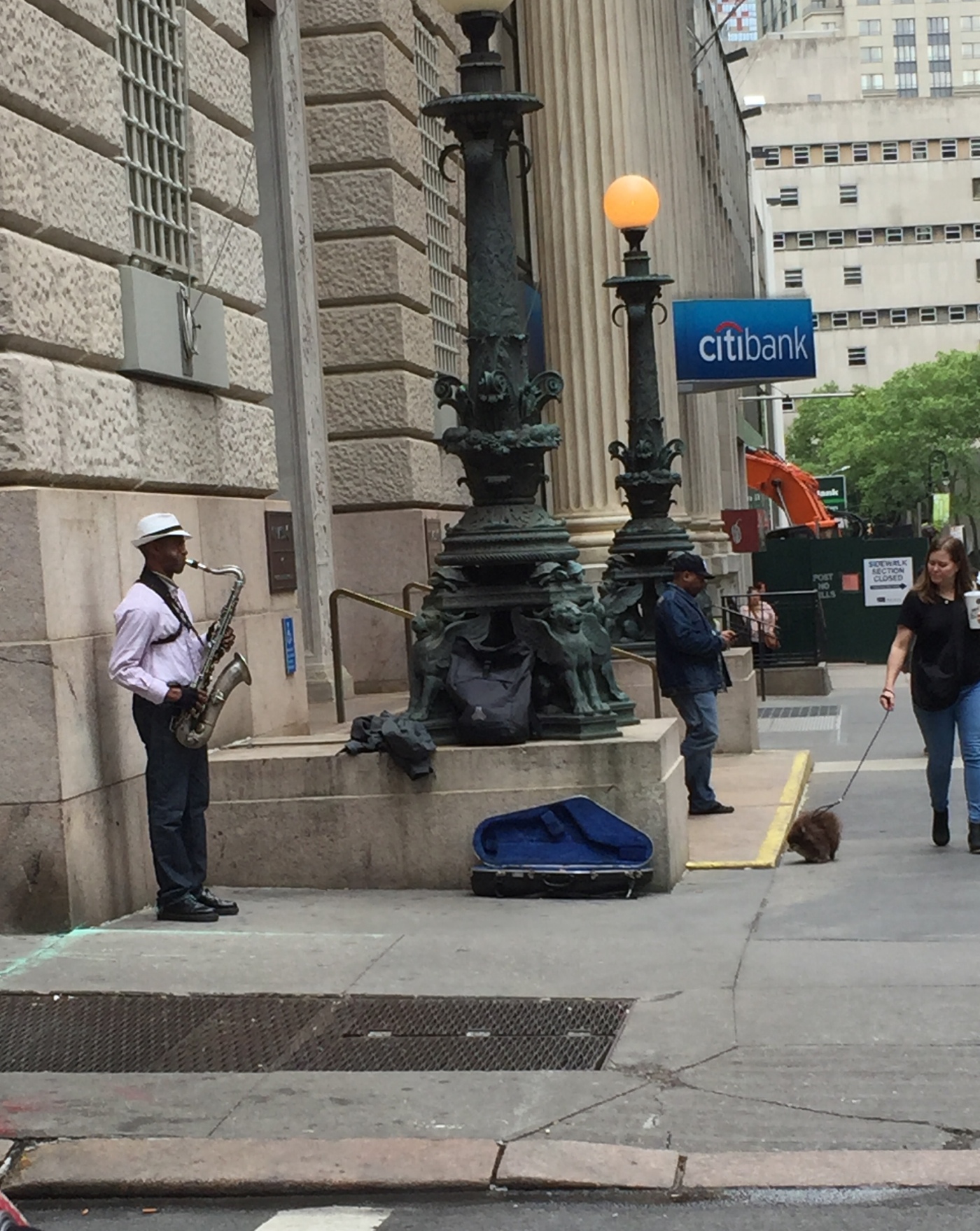 The saxophone player isn’t there today. He usually comes around this time in the afternoon. When he plays, I can hear the music in our apartment, although the corner on which he stands is seven stories down, half a block away, and across the street, in front of the bank. Whenever I hear his notes, I run down and put a few dollars in his case.

Lonely saxophone music, like a gong in a monastery, brings me to awareness, reminds me that I am really here. This is who I am. This is who I am now. Brynna in the Big City. Maybe it is too hot for him to play today.

I have an appointment with Tomomi, my most wonderful acupuncturist, and so I go out, though I know it will be hot out there. As I open the lobby door, twenty or more wet six- and seven-year-olds in bathing suits march past with their teachers, towels over their shoulders or dragging behind them on the sidewalk. They must have been at the YMCA pool down the street. Is it the end of school or the beginning of summer camp? I can’t tell.

The subway stairs are a challenge in any weather. There are 44 steps to get to the 4 or 5 train, and by the time I reach the platform, I want to sit down, but the train is arriving. For awhile, I thought it was my arthritis that was causing my difficulty; my calves and thighs ached, but not my knees. Last week, I decided the pain was coming from my knees. I told Rosemary that I might have to start thinking about a knee replacement. Several friends and family members have had them. I messaged a friend from high school who had knee surgery last year. “You should definitely do it. I wish I had not waited so long.” I texted my RA doctor and asked if I should see my primary physician. He said to see him first.  Perhaps Tomomi will be able to help.

On the subway, I imagine the lives of fellow travelers. I compliment a man on his tie, a woman on her shoes. My city friends would disapprove of such interactions. In Union Square, I climb the first seventeen steps out of the subway station and cross my fingers that the escalator is working on the final flight up. It has been shut down the past couple of times I have been here. Today, I thankfully ride to the top.

The streets are filled with bare shoulders and long, uncovered legs. A few older women carry umbrellas. On several corners, women peel and sell mangoes, orange and juicy looking. As I walk, I listen to the scraps of conversations that come my way, imagining that they are messages sent from the universe to me personally.

“Can you imagine? He is totally caught up in the idea of grad school, but it means nothing to him.”

“I’m in Union Square. I can stop and buy food if you want.”

I carry a few single dollars to give to the unfortunates who line the streets, asking for handouts. Some of my friends tell me I am only helping them to get drugs, but I can’t help myself. The man sitting on the low wall is so business-like, carefully dressed and with his belongings neatly packed in his backpacks, I have to do a double check. I see his sign and cup. Yes, he really is soliciting. I put my dollar in. 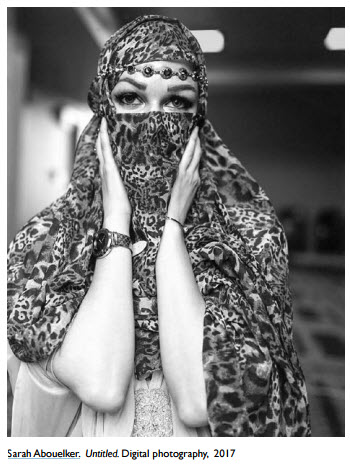 It is dark and quiet in Tomomi’s office, away from the hustle of the square. As she shuts the door and leaves me alone to let the needles do their work, I close my eyes and remember our visit to a photography exhibit in a gallery at a Soho restaurant on Friday. The photograph which comes to my mind is of a woman looking into the camera as she pulls a scarf of the most luxurious fabric across her face, so that all you see of her face are her startling eyes. I spoke to the LaGuardia Community College student photographer, Sarah Abouelker, asking her the story of her photograph. She took many pictures with a view camera at her mosque and the hanging one is the last that she took, suggesting to her model to look straight into the camera.  The article which accompanies the photograph in Otherness, the magazine in which the photographs are published, is by Nirmal Singh, also a student. She offers the view that “We do not live alone in our own worlds, so our behavior must reflect this fact…We so badly want a wonderful world, but we need to overcome our self-imposed personal boundaries and fears, to abolish the ‘head-in-the-sand’ attitude, and to take responsibility for our actions.”

In the city, I am surrounded by rich stories and glimpses of lives very different from mine. I am wealthy in the amount of the human race I have around me. I learn the names and stories of drivers from other countries, those who take me to the airport or to places I cannot manage to walk. I ask about grandchildren in Florida, mothers in Syria.  I speak to those who work in my building–when is Angelica’s nutrition class starting; what science fiction book is Giovanni reading today? So many people; such tangential lives. I ponder how I can take more responsibility for my actions. I wonder if I have a “head-in-the-sand” attitude. How might I be a better global citizen? How can I move beyond my “boundaries and fears”?

Tomomi reenters and turns on the light. I ask about her recent trip to Iraq, Jordan, and Israel.  She travels the world, offering her acupuncture skills to poor people everywhere. A few months ago she was in Malaysia, Viet Nam, and China. Now, she offers her advice to me. It is not my knees themselves, but my muscles, that are causing me trouble.

In any event, when I emerge back on the street, I can walk much more lightly. Showing off, I descend the 39 subway stairs instead of riding the escalator. On the train, I stand in front of the priority seating chairs, waiting to see if one of the young people sitting there will offer their seat. It usually works, but today, when they don’t budge, I decide to accept my karma. Since my legs are feeling stronger from the treatment, I should stand. Only take a seat from someone else when I really, really need it. Regardless, when an empty seat becomes available at the other end of the car, I make my way through the crowd and am relieved to sit.

Back in my apartment, I deposit the food I have bought in Union Square on the kitchen counter and collapse on the couch to rest. I had promised one of my father’s favorite plants I would repot it today, but I need to sit for a few minutes first. The noise of the construction from across the street almost drowns out the faint notes of the saxophone. I turn off the air conditioning and open the windows. Yes! He is there!

I leave the new pot and the potting mix, grab my money, and reach the corner only to see the sax player across the street, packing up his case. He leans over, straightening things, putting his instrument in. I am too late. He puts some papers in his back pack, flings it over his shoulder, and picks up his case. The young woman who has been sitting on the bank steps moves to his side. He has a girlfriend! They head together down the sidewalk, and I lean against the CVS building, watching them go, fingering the dollars in my pocket. I speculate about where they might live. They turn into the stairway leading to the R train.

4 thoughts on “Summer in the City”