It was Christmas morning, early, and I sat in the sunroom, hoping to watch the sun come up over the marshes, behind the North Cove, out beyond the distant river. The marsh grasses were brownish red and lifeless; in the distance, the leafless trees looked cold and friendless. The sailboats in the cove were all put away for the winter; a single barge stood at the mouth of the cove, its crane extended over the tree line, raised not in defiance, but in supplication.

My mind went to the place it so often, unbidden, goes – to our house in Maine, the one we sold last year. If I were sitting in the front room there, I thought, there might be some wood burning in the fireplace, and I would be looking across the frozen lake to the evergreens on the hill behind the island. What a better view that would be than this lifeless marsh! There was some snow there earlier in the month, so the lake would be white. I still track the weather over Casco, and have a moment of panic each time the temperature falls too low or the wind blows too hard, until I remember that it is no longer my responsibility to care for the little blue and yellow house at the edge of the lake. When I remember, I feel relief, and then, sadness.

Here in Connecticut, I heard the first drops of snow, sleet almost, hitting against the dining room window, and looked, resentfully, out over the sunless cove. Sometimes I think this place is a rebound home, having all the complications of a human relationship engaged in too soon, before the processing of the previous relationship has been completed. The snow came as if I had brought it on with my reminiscences, gradually blocking out my view of the barge, the houses on the other side of the cove, and finally, even the marsh itself. I could not see beyond the end of our concrete patio.

Why do I torture myself with memories, I asked? My yoga teacher frequently instructs us, “Let go! Just let go, stop thinking and focus on your breathing.” As the snow fell and the wind blew, I tried to do this, just to stop thinking about what I no longer had. Where did it get me? I think partly, I was grateful for the pain that came with the memories. It was a way of keeping that life in Maine alive within me.

Sitting in my chair, looking out over the snow falling on the patio, it came to me that I wasn’t going to have that life in Maine back again. I think, in a way, that I carry around a magical belief that the Universe – or someone in the Universe – will recognize my grief and relieve me of its burden. It is a kind of idealistic thinking that the world will be “put to rights” eventually and I will regain my rightful place. I understood for the moment that that wasn’t going to happen. Even if, by some miracle, we could have again the house in Maine, I wouldn’t be young and agile, able to make my way out onto the frozen lake, nor to care for the house the way I had. I think it is called acceptance. A moment of acceptance of reality. It doesn’t happen just once, but this was one of the times that I accepted that when I looked out the window, the lake was not there, and would never be, and that was OK.

It was Christmas morning and I had a great deal to be grateful for, and I thought for a bit about my life now. The woman I love was sleeping in the next room, and our extended family, all of whom were doing quite well at the moment, would be gathering for a holiday dinner shortly. We had never been all together like this for Christmas in Maine. This rebound life was pretty fine.

I recently reread an anonymous piece about grief. The author commented how grief comes in waves. “When the ship is first wrecked, you’re drowning, with wreckage all around you. Everything floating around you reminds you of the beauty and the magnificence of the ship that was, and is no more.” But gradually, he or she writes, the waves, though still as strong, come a little further apart, and in between, you find spaces where you can breathe. Eventually, the waves become less strong and even further apart, and you find there is life between the waves of grief. I don’t expect that I will ever be totally free of these waves of sadness, but I believe that there will also be waves of acceptance and gratitude. The Maine house, after all, has gifted me a book – a memoir that I am writing about my time there.

There is a balance involved in letting go, a way to keep the things that you will hold onto and to let go of the parts that are no longer part of the story. The common saying, “Holding On/Letting Go” directs attention to the working out of that balance – reminiscent of the Kenny Rogers song, “The Gambler”, “You’ve gotta know when to hold, know when to fold.” I could hold onto my happy memories of Maine and let go of hoping to recreate it.

Peter Simon, the brother of Carly Simon, and Raymond Mungo, wrote Moving On, Holding Still, a book of photographs and vignettes about their life at Total Loss Farm, a commune in Guilford, Vermont, in 1972. I followed their writings avidly at the time. I, too, was living on a commune and shared many of the interests and concerns depicted in their books. Recently, I asked Rosemary what she thought they meant by the title – Moving On, Holding Still. She said she thought it was about going forward in life around a center that holds true. Simon’s title offers the notion of taking the still part, the memory part, with you, as you venture into the next undertaking.

This Christmas morning, as the falling snow slowed and I could see across the marsh once more, I found a space between the waves of sadness. The marsh was white now, the snow covering the heads of the phragmites and other grasses that stretched between me and the cove, and the sun was trying its best to make its way through the clouds. Beautiful in its own way, I conceded. You have to fall in love with where you are and let go of what you can no longer have. There is no other way to be happy. 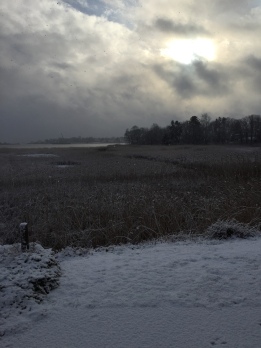 5 thoughts on “A Christmas Story”