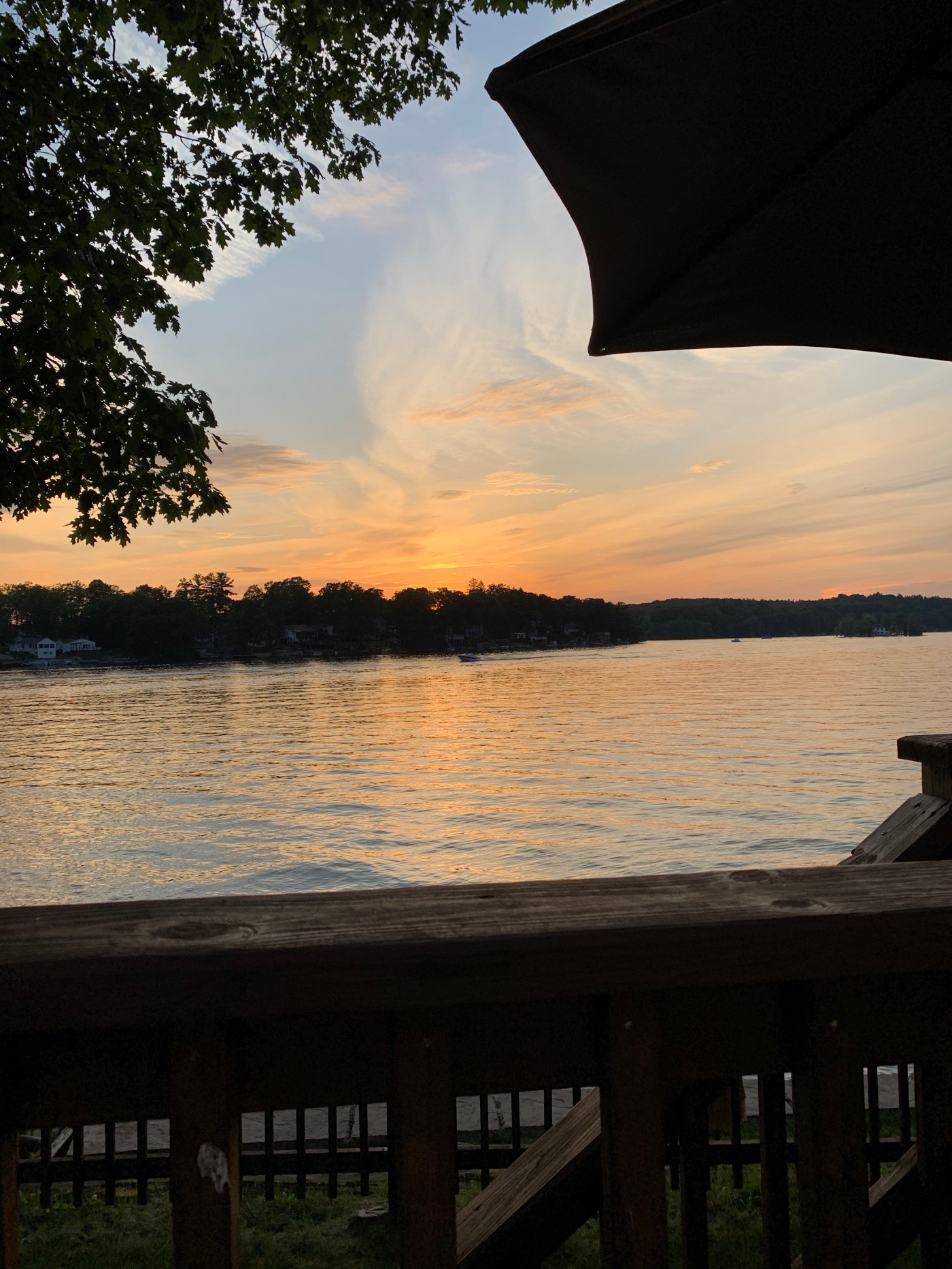 The store was huge and there were scarcely any cars in the parking lot. It was 7:00 on a Saturday evening and it was the Fourth of July. People in upstate New York had better places to be than Hannaford’s Supermarket, but I wanted coffee when I woke up in the morning.  We had brought all the food we would need for twelve days, but our pods did not work in the drip machine we had found in the cupboard of our rental. Neither of us had been in any kind of a store in four months, but this was a large Hannaford’s store; this was a small town; and it felt safe. My father had been Vice President of Hannaford Brothers in the fifties and sixties; the dividends from Hannaford stock had helped put both me and my daughter through college. It was an irrational, but reassuring association. We went in.

It was difficult to explain, even to myself, what it had felt like to be in the middle of the epicenter of New York at the height of the spike: the vacant streets, the empty skies, the ambulance sirens that sounded through the days and nights, the Governor’s pleas for hospital beds and ventilators, the fear of what awaited outside our door, the surety that death lay ahead.

But on our summer trip into what I thought of as “The Rest of the World,” I was inebriated with freedom.  In Boston, we read books to our grandchildren and ate at the table with the family, who had been as sequestered as we had been. From there, Rosemary and I headed to Upstate New York, for a week at a lake. We were traveling on the Fourth of July, and the roads were empty. Everyone was already where they were going. Around noon, we pulled into a McDonald’s, where we knew we could get window service, and ordered fish fillets, eating them in the car at the edge of the parking lot. Some miles down the road, we very carefully used the rest room at a service center on the Mass Pike, and I spotted another McDonald’s inside the plaza. Going a little wild, I asked Rosemary “Are you still thirsty?” She looked at me, with a look that said, “Are you serious?”

“The line is pretty short,” I ventured, “Only two people.” We stood quietly on our marked off painted spot, waiting for our milk shake and small coke.

When we reached our destination, we went to a car wash and to the supermarket. That week, we invited friends over, then, later, other friends; we reveled in the sun on our faces as we boated around the lake; one evening, Susan played her guitar and we sang Peter, Paul, and Mary songs into the night. We turned off the news. We swam, we grilled fish on the outdoor barbeque, we laughed, we acted as though it were summer and everything was fine.

It felt like the last week of school in my Senior year in high school when I skipped classes for the first time and, at the movie house in Portland with friends, saw West Side Story, Breakfast at Tiffany’s, and Imitation of Life, one right after the other. Or maybe it recalled the year I went to school in Scotland and had no family around to curtail my inner wildness. No, it was more like the time I left my first husband to live in Boston and re-found the girl I had wanted to be before my too-young marriage.

Of course, it was really like none of those. Maneuvering this liminal condition was tricky. I forgot the one-way signs in the supermarket aisles. On the porch with friends on the Fourth of July weekend, when the roar of boats and jet skis filled the otherwise quiet lake, and we could no longer hear each other, we pulled our chairs gradually closer until I could practically reach out and touch Philippe. We all noticed with alarm and quickly pulled back in our seats. When other friends visited later in the week, it rained and we left the porch and went inside. We sat on opposite sides of the great room, and their masked faces, looked small and far away. Another afternoon, walking on the main street in Chatham, Gerri and I drank iced drinks through straws under face masks. On our phones and computers in the evening, Rosemary and I read with alarm the reports of Covid numbers rising in the rest of the country. Still, it wasn’t New York City, it wasn’t crowded stores, and it wasn’t the long elevator ride up to our apartment. I could open any of the doors and walk around the yard without a mask. I could breathe.

And then, on the last day of our lake stay, as I sat writing at the dining room table, Rosemary’s phone rang. I could tell from her answers it was the infusion center with their routine call before her appointment, to ask about possible Covid symptoms.  Rosemary had been fairly healthy while we were away, sad that she couldn’t be with the grandchildren on Cape Cod, on the vacation that we had foregone because of the Covid danger, but grateful for the time we had had with them. “No, no cough,” she answered the caller whom I couldn’t hear. “Yes, one o’clock Monday.” She hung up and looked at me. Reality filled the room.

We would be leaving in the morning. These past twelve days would get me through the next ones. I would remember that there was another world waiting for us.

9 thoughts on “Have Mask, Will Travel”