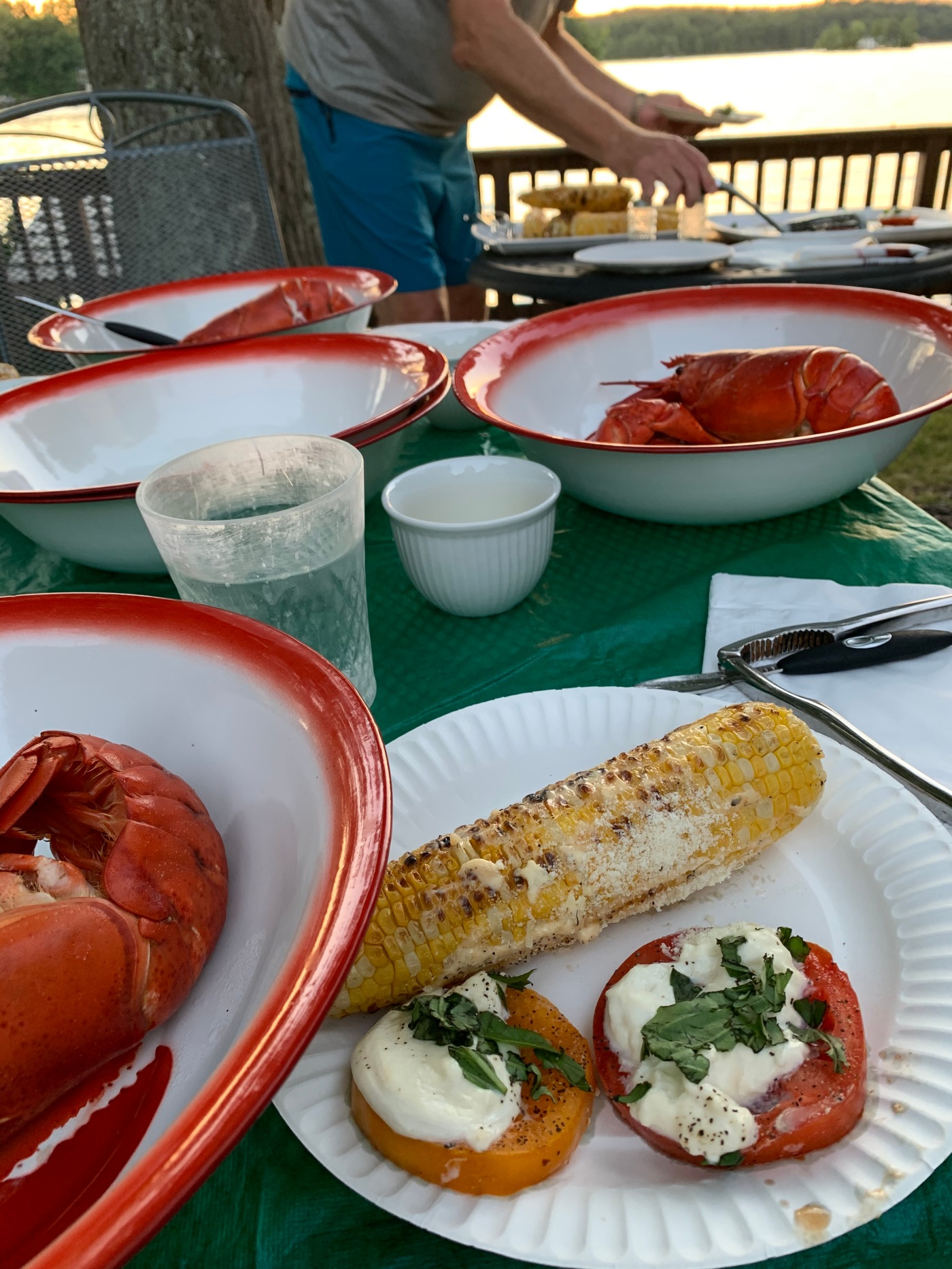 As we settled into the sixth month since this all began, we had to figure out how we could go forward with our lives. It seemed that everyone we knew was measuring the odds in the same way that we were. Rosemary kept reminding me, “If one of us contracted the virus through our actions, we would look back and say, ‘It wasn’t worth it.’”

I had not put a lot of stock in assessments that said mental health needs should be taken into account when considering what risks to take. What scale do you use to decide that feeling good is important enough to risk death? On the other hand, maybe a modicum of feeling that life was worth living justified a little risk.

My sister and her husband, Michael, were the last people we had seen before the lockdown. Once the crisis of the virus in New York and Connecticut had passed, they had been eager for us to visit them in Connecticut; but Carol worked in an Assisted Living Facility, and it just seemed too scary for us to spend time at their house.

Now, five months since we had last seen them, we had invited Carol and Michael to spend a couple of nights with us at our vacation rental in Upstate New York. Carol’s facility had not had any cases; they tested the patients and staff weekly, and Carol’s tests, including the one two days before, had all come back negative. Michael was retired and mostly sequestered. He did play tennis once a week and went into stores, protected. Still, “everything is a risk” had become our mantra.

We had learned a lot about the virus since the beginning of March. The virus spread primarily through droplets and aerosol. You had to be near a person for more than the time it took to pass on the street. The other person had to be carrying the disease, even if he or she were asymptomatic. Outside was pretty safe.  The odds that the next person we met would have the disease were slim. Yet, it could happen.

We had several errands to do in preparation for Carol and Michael’s visit, and Rosemary was struggling with side effects of her treatment. She had just learned that her sister in Hawaii had breast cancer. She said she was feeling more like a patient and less like a person every day. The loss of most of her hair had tipped her over some precipice.

The first stop was to buy fresh corn, tomatoes, and cheese from a farm store. The farm store near us required going inside a building. I was the one who generally took the risk of going in places; I didn’t have cancer, and Rosemary wasn’t keen on going places in the head scarf she now wore. I had been in the farm store twice previously, and assumed I would go this time, but Rosemary, silent beside me, seemed to be sinking lower into the passenger seat with each passing mile. I desperately pulled out my safety scales. The farm store required masks and only allowed one person per car inside. There had only been a couple of other people each time I went in.

“How would you feel about going inside?”

I could feel a stirring of hope; maybe it was mine. She went in and came out with her purchases. Next, the liquor store.

“Does this look ok?” I asked as we drove slowly by to scope out the store on the main street.

She jumped out of the car as soon as I stopped. I waited across the street. The store looked longer than it had when we originally drove by. I looked at my watch. I should have gone in. I didn’t see any other people, but the windows were covered with signs and it was dark inside. She was almost smiling when she finally exited.

Toilet paper. We drove around looking for a store that would allow a quick time inside, one that wasn’t too busy. One that looked clean. We stopped at a Cumberland Farms. Rosemary was already putting on her mask as I drove up. “New York now has one of the fewest new daily cases in the nation,” I told myself as she pushed open the door. “The whole state is in Phase 4 of reopening.”  When Rosemary came out with the toilet paper, she was smiling and sitting up in the seat. I was glad we could head to our lake cottage after this.

The visit with Carol and Michael was restorative. We put aside all thoughts of the dangers lurking beyond our little cottage, or even those that might be within it. The first night, when we toasted to the recent engagement of our niece Alex, Carol and Michael’s daughter, I heard Carol whisper to Michael, “Should we tell them?”

I became her sister once again. “What, Carol, what! You have to tell now!”

“Alex and Jonathan are getting married!”

Rosemary and I both reacted. “What! When?”

“August 25.” My eyes teared and I looked at my sister, whose eyes seemed a little watery as well. That had been our parents’ wedding date.

Alex and Jonathan had met on line the summer before. He was from the UK, working in Panama, but looking for a job in New York City; she lived in New York City. Because of the distance, they had dated only a few times and on one of their weekends together, Alex had brought Jonathan home to meet her parents. In February, Alex had gone skiing in Switzerland and then joined Jonathan in London for a little holiday together, just as the virus broke out full force, and they were unable to return to the United States. After four months together in a little third-floor apartment in Bath, England, in a building that belonged to Jonathan’s brother, they were engaged.

We sat down to a feast. Our visitors brought a wealth of seafood for both nights: oysters that came from the waters in front of their house and live lobsters and fresh salmon from the Gulf of Maine. Michael grilled the oysters, lobsters, fish and corn, and Carol prepared the sauces, butters, and salads. Michael had brought his Bose sound box and music enlivened the air; Carol found a tablecloth for the outdoor table, carefully positioned her lobster bowls, bibs, and tools, and had Michael carry down a small side table where she placed the feast. Rosemary and I felt like guests rather than hosts.

I pulled out my chair and sat at the table on the ground-level patio. “So, it will be a Covid-inspired wedding! I’m glad to see some good things emerge from this.”

Rosemary sat down next to me. “Such a romantic story! It’s sad that you and Michael can’t go to the wedding,”

“You are getting paid back, Carol!” I was the big sister again, teasing. Many years ago, she and Michael had eloped, getting married on a long weekend trip to some island in the Caribbean.

Carol laughed. “It’s fine. Even Jonathan’s parents can’t attend the wedding. Only two other people besides the couple can attend.”

With the good news, music, food, and company, we were all in a celebratory mood. To top it off, an exquisite orange sunset filled the western sky across the lake, lasting for a good half an hour or more.

The next day we spent mostly on the water, boating and swimming. We studied the birds and saw three eagles from the boat. Shannon, our daughter in Colorado, Face-timed after dinner, giving us all a tour of her new house and discussing the wedding with Carol and Michael. Shannon and Alex, cousins, talked regularly and, as it turned out, discovered they had had almost identical engagement rings, rectangular blue sapphires. “I hear they are going to live in Toronto for a year!” Shannon said.

“Yes. Between pandemic issues which have closed borders and visa issues,” Michael explained, “moving to Toronto seemed the best solution.”

“We’ll have a party for them when they both can be back in this country!” my sister added. The party after Carol and Michael’s elopement had been a highlight of then nine-year-old Shannon’s young life and she probably hoped for its equal in Alex and Jonathan’s party. But that would be a ways away.

As I stepped through the door on the night before we all left the lake, the leaves around the deck rustled in the dusk. I stood, looking up at the clear sky. Michael was playing “May All Your Favorite Bands Stay Together,” a song he always plays for me because he knows I love it. While I still worried about Rosemary’s health, this week out of the City had made me feel more like a person. I had accustomed myself to the constant vigilance of the City, and at the lake I had mostly let that go.  I had cancelled all my Zoom and Telehealth appointments and had had no schedule. Two sets of guests, besides Michael and Carol, had come earlier in the week for outdoor, afternoon visits. Rosemary and I slept late and made jigsaw puzzles—one of the Byodo-in Temple, my favorite spot on Oahu, and another of the six characters from the Friends TV show. As in Camelot, it had only rained at night. I spotted an almost-full moon rising over the house next door and called to Michael, who was cleaning the grill, to come and look. Rosemary and Carol heard me and came too.

Back in Brooklyn, we wait. In two weeks, at the end of the possible infection period, we’ll know if we did the right thing.